First a fruit, as in Tangerine, was introduced three weeks ago as the new name for ING Direct.  And now a tree – or rather, something oak-like – as in Oaken, the name for the new direct-to-consumer banking brand launched yesterday by Home Trust, Canada’s largest independent trust company. 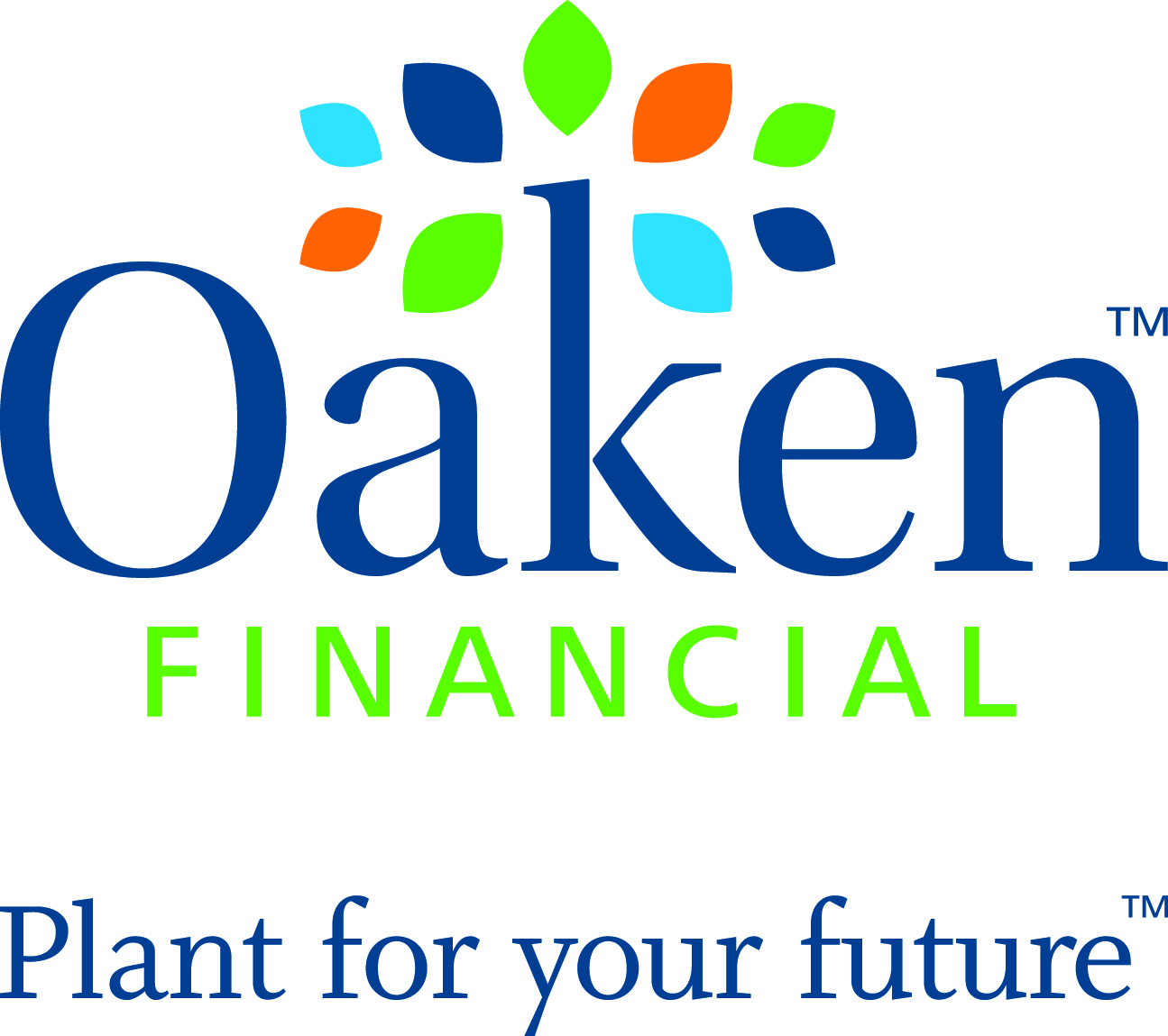 It was my honour to work on this name with the crack team (not what you’re thinking, Rob) of Mark Healy and Jen Lomax of Satov Consultants – Jen also being one of Marketing magazine’s 30 Under 30 for 2013.

And to create with them this line that helps tell the Oaken story:  Plant for your future.™

Names have a lot of important jobs to do, below in bold.  How well does Oaken get them done?

The story of this name’s strength starts with its distinctiveness.  Although Oaken is a real word, it is not in common usage, which gives it the differentiated feel of names like Genuity or Zappos, which are coined (i.e. invented) names.  Or of Quicken, another real word that is distinct because it doesn’t actually sound like a real word.

Oaken, defined in the dictionary as simply “made of oak,” expresses the essence of the brand – positioned around the values and character traits of strength, ultimate security, respect, stability, approachability and straightforwardness.  Important attributes indeed for a bank that offers highly-conservative banking instruments including GICs and savings accounts.

With respect to Tangerine, I wrote of the lack of synergy between that name and its tagline, Forward banking, a duo in which neither says anything meaningful about the other, amounting to a lost opportunity to perpetuate the brand story. 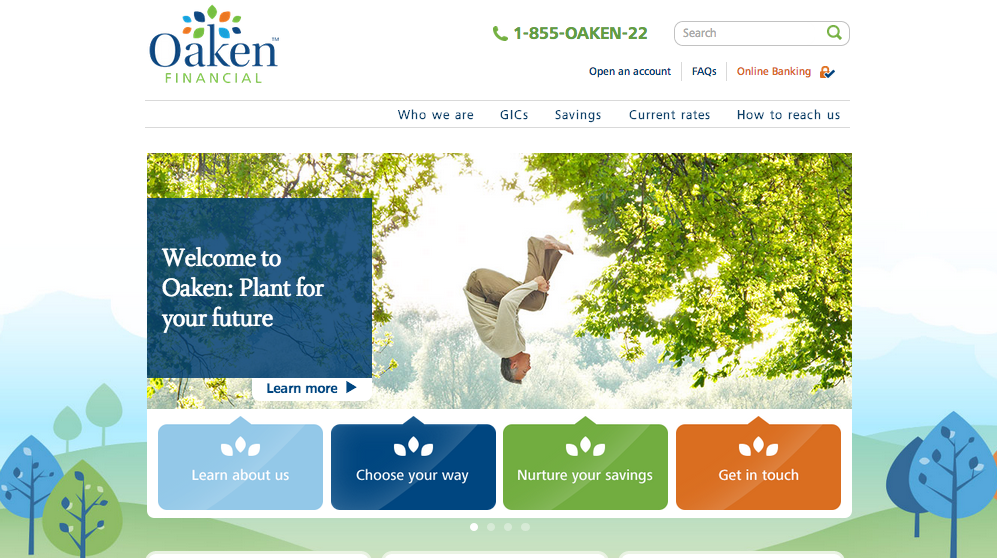 With Plant for your future, Oaken succeeds on this dimension.  That the name and tagline each say something meaningful about the other makes each of the two components more valuable, creating an overall 1+1=3, or network, effect.

Think of the synergistic name/tagline combo of Zipcar:  Wheels when you want them, or of Frogbox: From one pad to another.  Consider the value that would have been forfeited if these brands had concocted taglines like, say, A great car every time and You’ll be moved.

While I suspect that Oaken‘s distinctiveness and expression of the brand essence will serve it well, it is the synergy between name and tagline that will do the heavy lifting of making the name remark-able, or worthy of word-of-mouth.  The subtle twist on the common expression “plan for the future” into Plant for your future, and its connection to Oaken’s tree motif, is a hook into our brains that will make the name (and tagline) memorable.

Speaking of hooks into our brains (and it is not my intention to freak you out here, given our culture’s current obsession with zombies) brands are locked in an epic struggle for your grey matter.  Remark-ability breaks through the commercial appeals that are every day lusting after your big, juicy brain, in part because we trust word-of-mouth recommendations more than advertising. 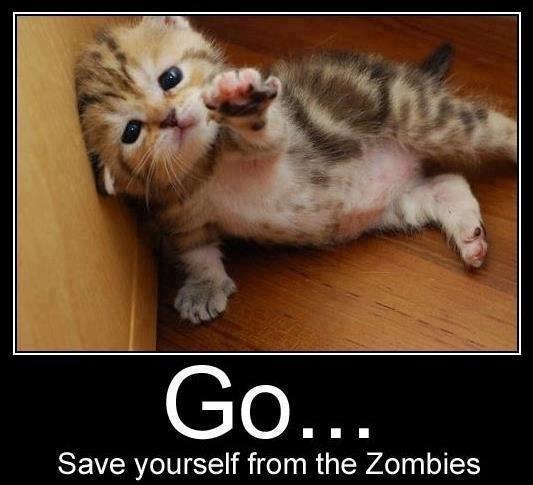 Does Oaken and its tagline have the power to inspire and attract stakeholders including employees, customers, investors and the media?  It depends on how these tools are used now and over the long term.  Looking at the “Team” link on the Oaken website, one would fully expect to see bios and headshots of the company’s senior executives.  Instead there are bios and pictures of Lena, Babita, Shane and Nana, members of the frontline staff.

This type of recognition is completely unexpected in the banking industry (especially by a company like BMO Financial Group, for example, which praised its employees with an ad that used fake employees.  Models, in other words).  It makes Oaken seem like an attractive place to work, and signals to customers, investors and the media that the brand’s claims of approachability and straightforwardness are the real deal.

Just as the Oaken brand promise is being brought to life on the Team page, so it is helping create a new system of names, language and imagery that will create even more brand value.  On the home page, for example, the tree motif is leveraged by the logo and other visual elements, and into the key message of Nurture your savings.  Similarly, the company’s history is told in a section entitled Our roots.  The Oaken and plant concepts have long enough legs to engender many other plays-on-words, although caution must be taken to not overdo it to the point of tackiness.

Finally, both Oaken and Plant for your future passed linguistics and legal checks that ensured no one in a key target audience would be offended by meanings, sounds and connotations present in languages other than English.

So, do you like Oaken?  Well, truth is, that’s the wrong question.  The right question is whether the name does the jobs done by all great names and will thereby build value for Oaken the company and Home Trust the company.  And if it indeed does those jobs, the ultimate verdict is still heavily dependent on the Oaken team.  By living in accordance with the brand promise or contrary to it, they will determine whether Oaken succeeds – or falls.

Your opinions are always welcome, especially if you disagree with something you read here.  Just click the Leave a Comment link the top of this post, or the comment form at the bottom of this post.  You will always receive a response, along with our sincere appreciation for joining our community.