“Actor Orlando Bloom threw a punch at Justin Bieber last night during an argument at a night club in Spain. Orlando’s hand was pretty sore today – you know, from all the high-fives he got.”

That, ladies and gentlemen, is the great joke told last week by Jimmy Fallon.  In truth, I have not done an extensive amount of research or reflection on what makes for a great joke.  Yet it seems that Jimmy’s joke is typical of the great joke for a few reasons, all of which revolve around a bit of magic regarded as essential by great joke tellers, writers, actors and presenters of any kind:  timing.

For example, the joke does not become funny until just the right spot:  the last little bit, otherwise known as the punch line.  If you are the kind of person who likes to tell a joke and have everyone stare at you like cattle in response, try telling your next joke by A, not having a punchline, and/or by B, giving away the punch line first.
To see just how deflating bad timing can be, let’s apply B to Jimmy’s joke:

“Actor Orlando Bloom’s hand was pretty sore today – you know, from all the high-fives he got.  Turns out he threw a punch at Justin Bieber last night during an argument at a night club in Spain.”

Even the half-soused crowd at your local comedy club would greet that one with crickets.  More to the point for branders and advertisers, those same customers wouldn’t be able to retell the joke to their friends, not because they were half-blitzed, but because an idea that was highly remark-able when written one way was made deeply unremark-able in another. (See the book excerpt on remark-ability here)

Advertisers somehow fail on this fundamental requirement of timing all the time.  The Yellow Pages is in the midst of just this issue, with the countless ads they have plastered in Toronto’s underground subway system at undoubtedly tremendous expense. 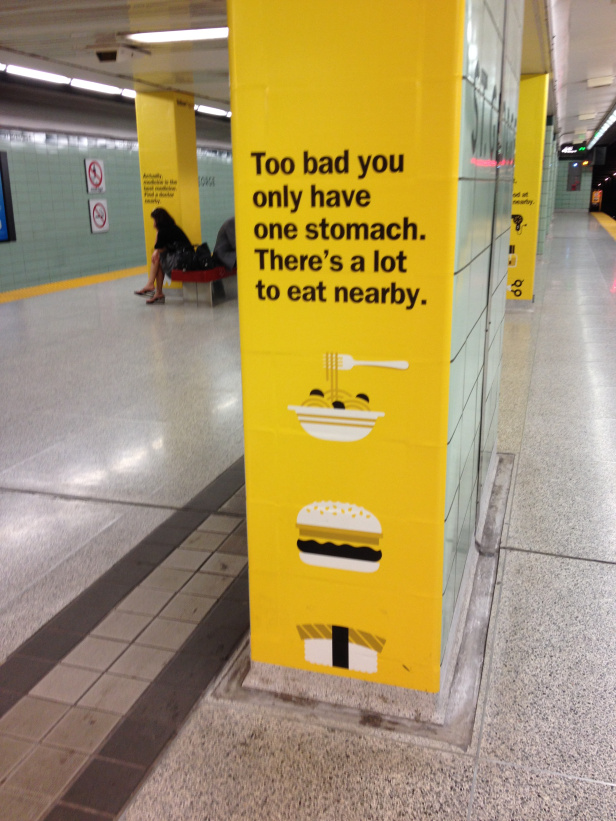 Here’s the copy on one:
“Too bad you only have one stomach.  There’s a lot to eat nearby.”

And another:
“Gents, there are stores that can drape you in dapper close by.”

I have always wanted to use the word “nonplussed” in a sentence, and thanks to copy like this, today is the big day.  These ads are meant to be, if not funny, then at least clever, and they are decidedly not – partly because they lack any sense of timing whatsoever.

Consider this quick patching up of the stomach ad:  “There are hundreds of restaurants nearby.  Too bad you only have one stomach.”  Now at least, the punch line – weak as it is – is in the right spot.

The other thing that makes this ad campaign so dull and forgettable is that there is absolutely no consistency or common voice from one ad to the next.  The ads are just a bunch of words that some people wrote.  This as opposed to having a common pattern that hooks in customers’ brains, thereby creating a synergy or network effect in which each ad we see is more quickly recognizable, memorable and thus valuable than the next.

As just one example of a simple technique that is used widely but for some reason was ignored by Yellow Pages, check out these clever ads from Starburst candy, all of which employ the same tagline to create consistency and remark-ability: 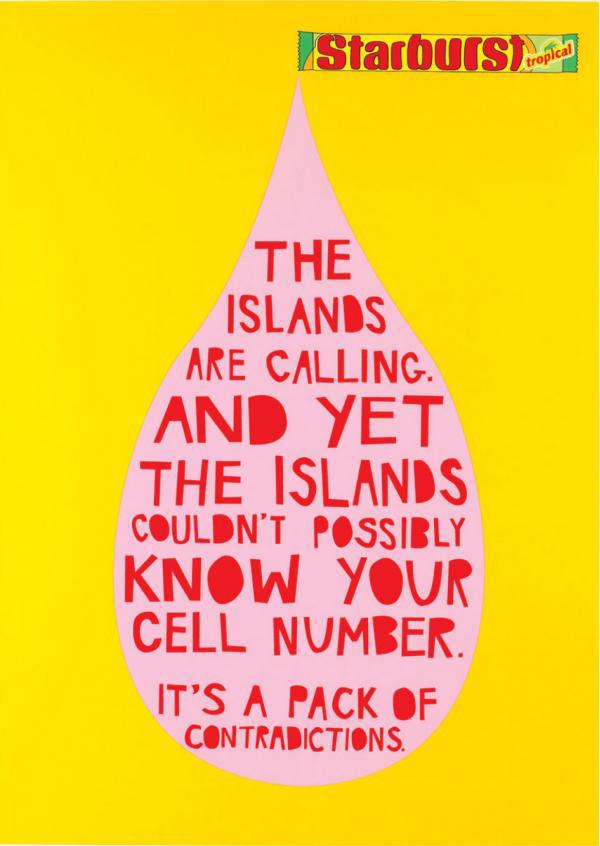 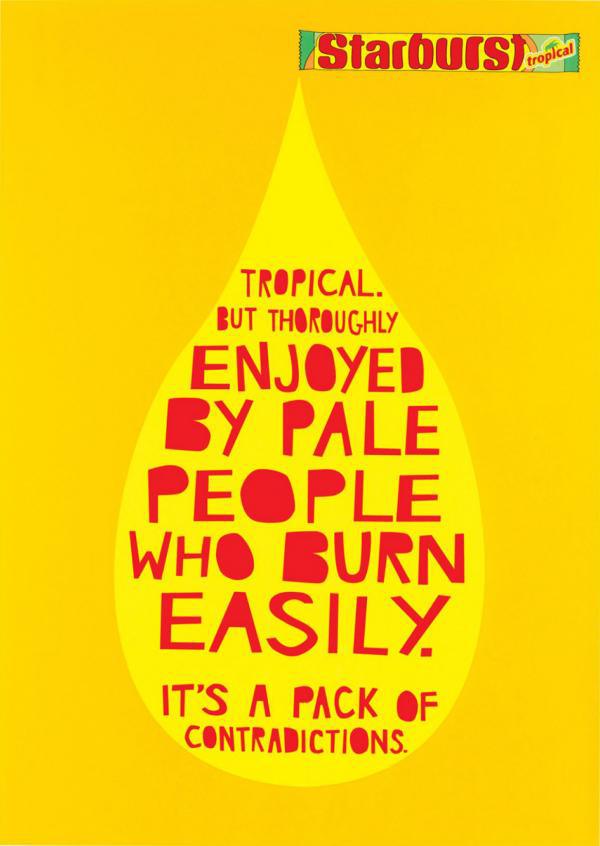 So, when you are writing or overseeing your next important piece of communication, adopt this standard of quality:  your copy will be so well timed, clever and consistent that it will actually save lives.  That if your ads were in the subway instead of Yellow Pages’ bunch of words, you might get at least one commuter, already and understandably depressed from having to ride the Toronto subway, thinking twice about jumping in front of the next train and making the journey even longer for everyone else.  And so your brilliance will have saved, in addition to a life and a whole lot of time, a whole whack of money on an advertising campaign like Yellow Pages’ – that, in terms of long-term impact, was otherwise destined to be Bieberesque.

—
Joyce disagrees with my point of view, in her more in-depth piece on the campaign.

Book:  Buy the #1 Globe and Mail bestselling Brand: It Ain’t the Logo or download a free chapter.