Then read this one:

If you have any connection or affinity with any of these causes, set that aside for just a moment.  Then ask yourself:

The first organization wants to have an impact that lasts an eternity.  The second wants wants to eradicate your fear.  The third wants to ensure you always have access to assistance.  It is this one, the third, that does little to inspire.  Compared to the others, it reaches not nearly as high, and it has far many more words, further weakening its impact. 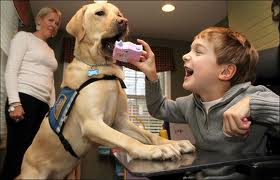 Unfortunately and ironically, the world of charitable giving is as competitive as they come.  There are no fewer than 85,000 charities in Canada.  In 2011, only 23% of Canadians (5.7 million people) claimed a charitable contribution on their tax return.  Meaning that on average, there are a mere 67 donors per charity (making the assumption for convenience that each person gives only to one charity) – which is not enough.

Looking at it another way, Canadians gave in the area of $8.5-billion to charity in 2011 – meaning there was an average of $100,000 available to each organization.  Which is not enough.

And of course we know that the distribution of giving is highly unequal.  From an article I recently wrote for Toronto’s Hospital for Sick Children (SickKids), I know they have raised more than $300-million in the past three years alone.  Most other charities raise but a microscopic sum in comparison.

I don’t happen to know how much the Cerebral Palsy Support Foundation of Canada raises each year.  But I want it to be more, and I have a feeling it isn’t much.  I have no reason to believe they are doing anything but good work.  And I still remember the boy in my grade one class in Winnipeg who had cerebral palsy.  To see someone with the condition – to see someone with one’s own eyes – is to be deeply moved.

But in the domain of language – in the world of key messaging and taglines and soundbites and vision statements – we need moving words.