Ask the Toronto Blue Jays.  Or even better, ask Justin Trudeau:  everyone loves a winner.

Even the people who didn’t vote Liberal have grudgingly acknowledged that he has great looks and dreamy hair.  And the Americans go much further.  As my Facebook friends have taken the time and care to meticulously document, the Yanks on social media have deemed Justin to be everything from “a hottie,” to “edible”, to – keeping in mind these are Americans – “the Canadian Hottie President”.

Fortunately, however, there has been serious reaction as well.  Such as, “How will the Canadians ever tackle climate change when their new Prime Minister is so hot?” 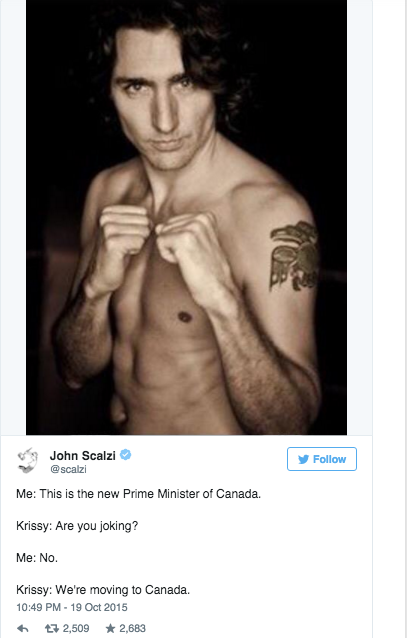 My point is that no one would be making any of these comments if Trudeau had lost.  No one would care.  It is not Justin’s looks that are the pivotal element in the publicity he is receiving.  It is the fact that he won a national election and is now assuming the role of elected leader of a significant nation on the world stage.

It’s the fact that he’s a winner.

What does this mean for your personal brand, or the brand of your organization as you try to share your unique gifts with the world?  The primary message is not that you should go out and get a new hairstyle, or a nose job, or lose 20 pounds (even though taking the best possible care of yourself is highly correlated with career success).

The primary message is that, as the old saying goes, nothing succeeds like success.  Potential and actual clients, employees and strategic partners attach themselves strongly with people and organizations they perceive as winners.  As leaders in their field.  As people great at what they do.

So go do something great.  It doesn’t have to be curing cancer, although that would be nice.  And then find a way to deal with your likely level of natural humility – and then communicate your expertise, accomplishments and overall greatness to others.

Because we eat this stuff up.