“Fans of the New York Yankees were in force at Rogers Centre in Toronto Wednesday night, for a crucial game against the Blue Jays.  Many were bearing the American flag, the Stars and Stripes, and waving it proudly in the stands.”

If you’re Canadian, how does that make you feel?

In truth, it probably ticks you off.  The nerve!  Coming up here and waving their flag in our faces.  Unbelievably rude.

Except that, as far as I’m aware – and I have attended several Jays games as they’ve dominated down the stretch – this did not happen.  When was the last time you saw an American waving his or her flag on Canadian soil?  Maybe at the Vancouver Olympics or the world junior hockey championships or the Pan Am Games, those events being more about nationalism than anything else.

Or maybe Americans have more social grace than Canadians like to imagine.  In fact, they do indeed have more civility than we do on this issue, because Jays fans were – and this did happen – seen at Yankee stadium last week waving the Maple Leaf.

As a Canadian, and as a Jays fan, it was embarrassing to watch.

Yankees fans evidently don’t feel the need to come to our building and wave the Stars and Stripes, because they are in attendance to represent their legendary team and their legendary city, not their country.  But evidently, for at least some of us, baseball is still – 22 years after winning the World Series twice in succession – about proving Canada can beat the US at its own game.

Which doesn’t make much sense, considering only three of the Jays’ 40 players are Canadian.  True, the owner of the Jays (Rogers) has positioned the brand as “Canada’s Team,” and the team’s logo bears a prominent maple leaf.  It seems safe to presume that Rogers has done this not out of national pride, but to make more money from more people across the country watching on their TVs, computers and mobile phones.  And yet, there is an undeniable Canadian aspect to the Jays’ brand, because people all over Canada love them, and because they are the only major league baseball team in this country.

But Canadian-ness should not be the team’s defining feature.

It made a lot more sense in 1992, when the Jays were driving to become the first non-American-based team in the history of Major League Baseball to win the World Series.  We could feel tradition tilting against us as interlopers; of course, if you are old enough, you remember the US Marines flying our flag upside-down. 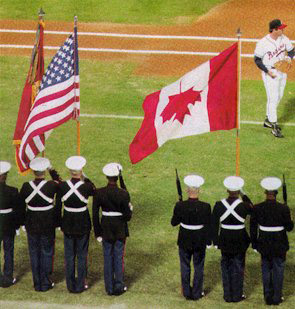 But we demolished tradition.  We’ve been there.  We’ve done that.  We have the banners in the rafters to prove it.  We have a legacy – epitomized by Alomar, Carter and a truly shocking all-time roster of legendary players and their feats – that courses through the veins of every Jays fan who’s ever watched on TV or had the pleasure of seeing them play in person. 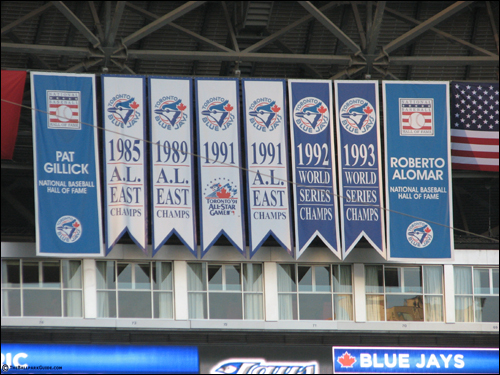 So now, 22 years later, let us play baseball, not politics.  Is our baseball team good enough to beat its opponent, or not?  To my mind, waving the Canadian flag at a Jays game is an instant admission of inferiority.  That we are not good enough.  That we need something extra – beyond the bounds of talent, and of pride in team and city.

The Number One Rule of Branding is:  Be Consistent.  A brand is what people think of you, after all, and if you keep changing the message, people won’t know what to think.  But sometimes brands and their fans outgrow their positioning.  Sometimes they mature.  And one would hope that in these more-than two decades, we have become confident enough as Torontonians and sufficiently self-assured as Canadians – and jingoistic just as Jays fans – that we can just play ball.

—
IN THE MEDIA THIS WEEK:  On CBC Radio One re Volkswagen, and in the National Post re Mac’s convenience stores.

NEW VIDEO: Check out my presentation in Houston earlier this year (to client USG) on what a brand really is.  (For the abbreviated version, start at 3:45 and stop at about 6:00.  For the longer version, watch the whole thing.)