This Monday October 27th, I will not be voting for Darrin Davidson, candidate for Councillor in Orangeville, Ontario.

Because I do not live there.  Instead, I live and run my branding business in faraway Toronto.

But if I did live in Orangeville, I would vote for Darrin, more than once if it was allowed, because we are very good friends and have been for almost 20 years.  But it’s not the simple fact of our friendship that made me get out of bed this glorious Saturday morning, likely one of the last warm and beautiful days this year, after a long and tiring workweek, and break my rule not to do a stitch of work on Saturday if it is humanly possible to avoid it, least of all for my good old buddy, Darrin Davidson, who has not met me for a beer in say, two months, because he has been up in delightful Orangeville, Ontario, hammering in lawn signs, going door to door, kissing babies, handing out flyers and doing a whole bunch of other campaigning stuff that does not involve going out with his old buddy Andris for a single blessed pint.

Instead, it is the simple fact that the brand messaging for Darrin’s campaign is really well done, and he did it all himself, with absolutely no assistance from me, as I am on a boycott until he can peel himself away from his precious Orangeville and make at least a passing glance at the 416 area code.

That said, I would not be a friend at all if I did not examine his campaign materials and take potshots at them, and tell him, like the closest friends are obligated to do, what I would have done differently if he had bothered asking me to help with his campaign in the first place. 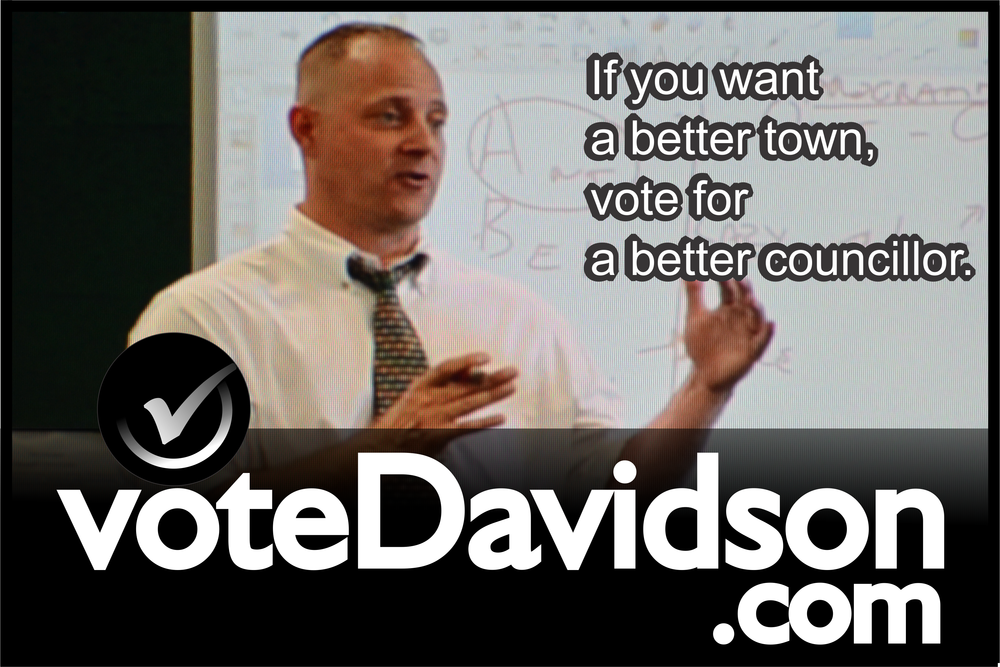 Anyone even passingly familiar with Darrin will recognize this message right away as Darrin being Darrin – for expressing clearly, firmly and without apology a bold point of view. You will never lament Darrin being passive, wonder how this guy views a particular situation or wonder what he is going to do about it.  It takes some substantial cojones not just to stand up your friend for 60 days and counting, and to take not just the typical approach and say I am different than the next guy (what we in branding call positioning), but to go to the considerable next step of literally saying that I am better than the next guy.

Now, in terms of the visuals, I would have Photoshopped in some more hair for my old buddy, but there are of course limits to what technology can do.

Here is what looks like a selfie, and what seems to be some kind of cross-branded campaign to get the Beach Boys back together, which I would tell my friend is just a tad off-message, but the main branding point here is that Darrin’s campaign has been full of these self-taken shots, which conveys more than anything his do-it-myself, take-charge, get-things-done attitude, which comes as close as anything to defining the man. 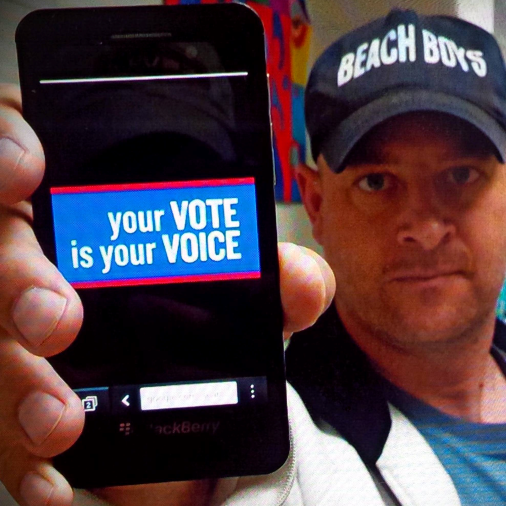 The your vote is your voice message is of course a way to inspire people to get off their couches and get to the ballot box, which seems as sensible a campaign strategy as any for a guy who hopes to get the most votes, but again, the key branding takeaway is that this image conveys that Darrin actually believes deeply in personal responsibility, self-empowerment and the freedom to choose, and he is not afraid of saying so.

And finally there is this piece, which reminds us not so much that Darrin Davidson puts his town above his old buddy Andris, but that the guy has a sensitive side, most vividly shown when we saw Jerry Maguire together in 1997 and he broke down crying. 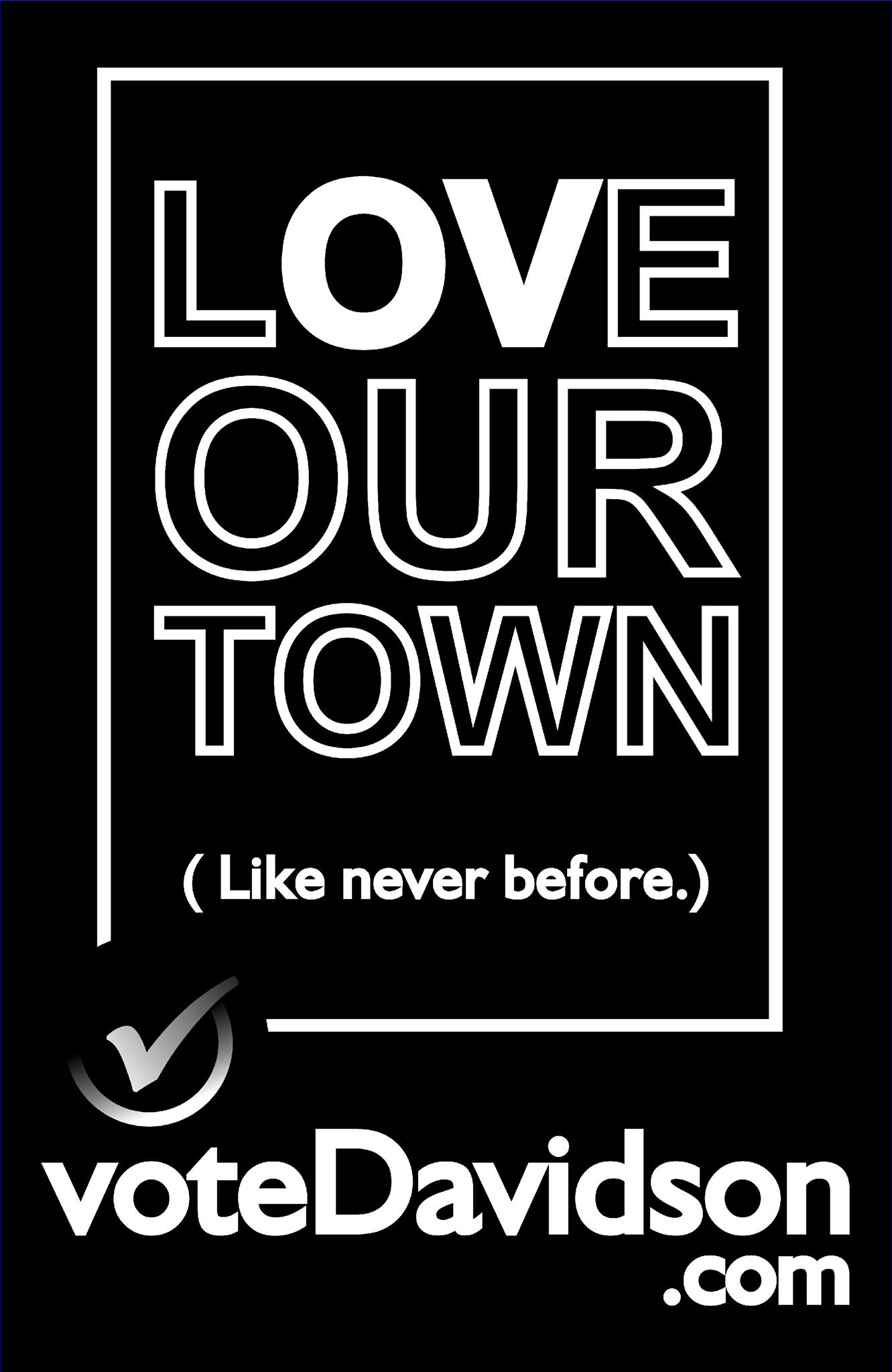 I cannot recall if it happened to be at the “You complete me” moment, or the “You had me at hello” moment, although Darrin to this day talks about the pursuit of “Kwan,” the term used by Cuba Gooding Jr.’s character to describe the intersection of “love, respect, community and money.”

So there you have it:  I won’t be voting Davidson, because I do not live in Orangeville.  If you happen to live there, then you have the opportunity to vote for – and bless you, even have a beer with – a guy with a brand as clear as they come.

Andris Pone is President of Coin, a leading branding firm with offices in Toronto and Montreal.  Through naming, tagline and brand foundation services, Coin pursues its vision:  a world in which every person can share their unique gifts in pursuit of their livelihood.  Coin clients include Sun Life Financial, Four Seasons Hotels and Resorts, BMO Nesbitt Burns, RBC Wealth Management, Oaken Financial, Fairmont Hotels & Resorts, Canadian Tire, The National Ballet of Canada and many others.