For my money, it was one of the best newspaper headlines ever written.  Anyone passingly familiar with the songs of the Tragically Hip will instantly recognize it as one of the band’s biggest hits, and anyone who has ever heard of Gord Downie – which is pretty much every Canadian, now – will instantly feel its bittersweet and profound depth of meaning. 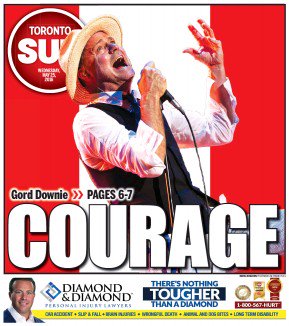 Why is this headline so great?  Because it is so true.  And because it sums up an entire life, and the music of that life, and the joy that that music has brought into millions of other lives, in one word.

As incredibly powerful as this headline is, it is made all the more so by its accompanying image.  Of Gord in one of his many trademark poses, singing at the top of his lungs, against a backdrop of Canadian red and white.  Presumably it was taken before he knew of his diagnosis.  But in its present context one cannot help but interpret his wail as a one-word scream to the heavens – not courage, but why?

Recently I was thinking in vain of people who’ve attained the Holy Grail of branding:  to own a single word in our minds.  Exceedingly few people have drank from the cup.  And then this horrible thing happened to Gord.  And instead of lying down, he did something fully, completely outrageous.  He decided to take his band out on tour.  To play live shows in front of people who know he is dying, who know that when the lights come up at the end of the show, that really will be it.

Not to mention the small matter of the trepidation that any normal person who’s dying of brain cancer would have performing in front of 15,000 people every night.

No number of words can possibly express the bravery we are witnessing or write the narrative of this great man’s life.  Which is fine.  Gord’s given us the only one we need.